Moulay Hicham is the cousin of the current king of Morocco, Mohammed VI. It was announced today on the prince’s Facebook fan page, the launch of the Moulay Hicham Foundation for Social Science Research on North Africa and the Middle East. The foundation was long-talked about. It has become background noise over some sectors of Moroccan social media recently, as speculations grew as to whether the sudden resignation of Ahmed Reda Benchemssi [Fr], the head of one of the most popular independent Moroccan weeklies, and his announced departure to the US, was linked to a recruitment by the foundation. Given the repeated show of sympathy expressed in the past by the prince toward the independent (mostly francophone) press, this isn’t unlikely. A recent blurb published [Fr] by the departing journalist confirms somehow what some have been suspecting: the prince, who lives and works in the US (he is currently a Visiting Researcher at the Center on Democracy, Development, and the Rule of Law at Stanford University) is depicted as a private man, followed, and his wife, in a visit to his cardiologist where, the journalist confirms, he is treated as anybody else. 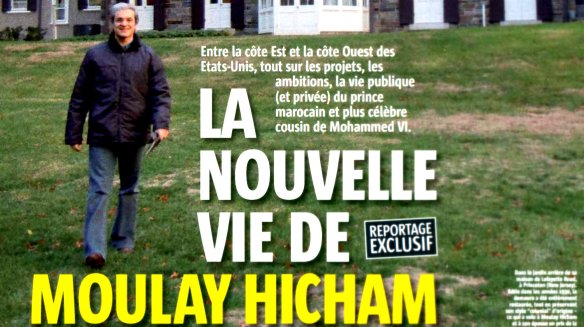 Prince Hicham has been one of the rare members of the royal family (if not the only one on record), apart from the king himself, to make his political views public. He published a couple of political essays in some prominent newspapers like Le Monde Diplomatique among others, and offered interviews to TV channels. He has shown progressive positions in the past which earned him the nickname of the “Red Prince.” But his candid stance and sometimes critique of the Moroccan establishment have also cost him his place among the king’s closest entourage.

In the early 2000s, the prince seemed to be questioning the system of succession, known as primogeniture and suggested its replacement by a council of regency that would include in addition to the king, other male members of the royal family. His statements led his opponents,including very close collaborators of the king himself, to go as far as accusing the prince of plotting against the regime for his own personal benefit, as he seemed to be groomed by a young generation of democrats who hoped to see him play some political role in the post-Hassan II era.

Partly because of his heart illness, and mostly (probably) to avoid further confrontation with the Moroccan establishment, the prince adopted a low profile in recent years.

He only rarely appeared in public and his recent essay [Fr] dates back August 2010.

Here’s an excerpt from the foundation’s preamble:

The Foundation’s mission is to foster research in social sciences in the Maghreb and the Middle East.

It aims to study society and political systems and to identify the factors which lead to open societies as well as the obstacles to change in the region.

Within this framework, the Foundation intends to highlight the factors of change in the area and the new challenges posed by globalization and by the hegemonic regimes’ transformations.

The Foundation promotes research that focuses on both endogenous and exogenous dimensions of social and political change and on the key players involved in this change. Particular attention is given to cultural and religious factors which foster pluralism in society.

Error: Twitter did not respond. Please wait a few minutes and refresh this page.