Protests continue for the second day in a row in Egypt, despite a ban issued earlier today by the Ministry of Interior. The popular movement seems to have reached a new level today as reports coming out of the seaport town of Suez, speak of the use by the police of live ammunition. A witness called Aljazeera tonight from the city describing “very violent clashes and unprecedented use of force by anti riot police.” He also spoke of “total chaos and dozens killed”. This account has not been independently verified but the picture is pretty reminiscent of the situation in the Tunisian city of Sidi Bouzid where, in the wake of the death of Mohamed Bouazizi, an unemployed man who desperately set himself on fire to protest for his dignity, an uprising started 4 weeks ago and swept across the country leading to the toppling of Zine El-Abidine Ben Ali. If reports of killings of civilians are confirmed, Suez can well become Egypt’s Sidi Bouzid. The city has a particular place in the country’s popular imagination: it has always been the outpost; the city that has paid the heavy price during the campaigns that Israel waged against Egypt. 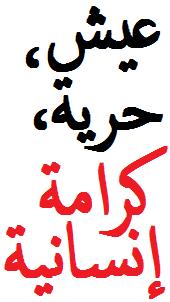 One of the slogans chanted by protesters in Egypt today: "Bread, Freedom, Human Dignity"

Many would argue that the situation in the 80-million-strong, largely poor Egypt is different from that in the much smaller, urban, relatively wealthy Tunisia. The importance of the ongoing protests and the ability of the movement to sustain itself as it did in Tunisia, are two important questions for which the coming days will provide clearer answers.

The Internet has, from the onset, played a key role in Egyptian protests. It will be even more crucial than it proved to be in Tunisia. Social networks are playing a driving force in coordinating protesters and sustaining their movement. The regime of Mubarak has understood that dimension very well, as its hesitant attempts, earlier in the day, to neutralize the Internet by shutting down Twitter and Facebook, proves it.

The regime is now bracing itself for next Friday prayers as millions will undoubtedly rally across the country. SMS text messages are being sent around, calling people to gather in specific points in the capital Cairo right after their exists from mosques. Funerals of dead protesters have also the potential to spark demonstrations. That, apparently, is another lesson that Mubarak has learned from the Tunisian example: reports today say one dead protester’s body was hastily buried early in the morning, less that 12 hours after he was killed. Requests from his family of the deceased for a forensic examination to be carried out on the body were promptly rejected.

It looks like Mubarak is walking in the footsteps of Ben Ali. Arguably, he has almost completed the “Ben Ali Cycle”: Repression-Killings-Funerals-Friday Prayers-Uprising-Revolution-First Plane to Jeddah.

Wishful thinking? Not so sure. For the Egyptian uprising to reach the breaking point that will force Mubarak and his regime out of history, I think there are two crucial questions that remain to be answered:

Will the middle class join the movement strongly enough to make the regime’s survival impossible? And, maybe more importantly, will the Egyptian military have the moral integrity to embrace the street’s demands, respect the people’s will for democracy and force the regime out?

**
On a side note, and just to give you a taste of the nature of the treatment reserved for protesters arrested during the demonstrations yesterday, hear this recording by the Guardian’s reporter Jack Shenker, as he covered protests in Cairo on Tuesday. Shenker and other journalists, alongside protesters, were beaten, thrown into the back of police trucks and driven in the dark through the city. As of now, many people remain unaccounted for, disappeared, held incommunicado in Mubarak’s jails.