On Saturday 26, a Barcamp has been organized in Paris by a number of netizens and social activists. This year’s focus was on Social Innovation: How can online social networks and citizen media impact on people’s everyday lives? How can online initiatives help promote social causes? Is online commitment enough to foster new ideas and sustain social movements?

People from the media, the civil society, from NGOs like Wiser Earth, community managers and social entrepreneurs have been sharing and comparing their experiences.

This meeting couldn’t come at a better time as these questions seem to become more and more pressing among the online communities I belong to. I remember that in Santiago in Chile, during the Global Voices Citizen Media Summit, most of these issues have been raised and the question was asked about how to better use Web 2.0 resources to spread the message, build communities and eventually have an impact. Questions about how to assess success and failure were debated as well.

When and how do you know that your project has succeeded in “moving the needle” is a question every online project initiator must be asking at some point. It is a question difficult to answer since it involves many unknowns relative to every individual project. But from the feedback that one can have from previous initiatives that have either succeeded or failed, there emerges a certain outline of what should or should not be done.

On a nutshell (and this is an answer, albeit partial, to Mahdi with whom we’ve been discussing this very question lately), some notes taken during the workshop on why and how NGOs can optimize their work using web 2.0 tools taking as an example the experience of Aiesec, an organization run by students, with over 40,000 members:

– To avoid preaching to the converted (see Mahdi’s interesting essay on Graph Theory) build an internal action plan which lists audiences associated with a target-oriented strategy. For instance if your target audience is a community of poor and illiterate peasants, you’re obviously not going to use Twitter or Facebook to reach them (something that unbelievably enough some Moroccan NGOs keep doing somnolently). Think of other web 2.0 tools little talked about like SMS text-messaging or Voice-Over-Internet-based platforms like FreeFone.org very suitable for an audience that doesn’t have access to, or is not very familiar with the Internet.

– Fundraising over the Internet has never been so easy. Now there are free and smart tools that help raise money for NGOs in a way that is pretty convenient to donors. Examples:

MailforGood [Fr]: a brilliant initiative that is sponsored by Google, Yahoo and Microsoft among others and that lets you sponsor an organization of your choice and raise money for it by just accepting to add a banner to your emails. Each time you send an email of these, money is raised for your favorite NGO. it’s as simple as it sounds.

MonExTel [Fr]: just by sending your old cell phone by mail for recycling you can make a donation to an NGO of your choice.

– NGOs need to do some homework on how mass collaboration works and how it can be made profitable in the context of social entrepreneurship. Wikinomics (the book and website) and TechSoup are good references in that matter (any more suggestions are welcome).

– Remember that the Web 2.0 is just a continuation of other tools to communicate. It is there for people to talk to each other. It isn’t the place to drop messages or dictate policies that users are not exactly there for. people seek a conversation, an interaction and a message that has some added value.

– Adopt the tools of viral marketing: videos in particular.

– As communications strategy Aiesec has chosen exclusively to adopt a “story telling approach”: according to their community manager, David Pires, his organization is no longer using traditional ways of advertising/communication/marketing. They have decided that their sole strategy is to let members tell their stories and experiences within the organisation and share it in their own networks with as much people as possible. This apparently is helping create a constant buzz over the internet around the organization.

– For internal communication and logistics and to connect with similar projects around the world and to gain more visibility there are very powerful and free tools available online like Wiser Earth which participants at the Barcamp seem to have overwhelmingly adopted. I don’t have any personal experience with it.

– Finally: know how to recognize failure and learn from it. In other words: make your failures a success.

The only issue I had with the gathering is that it was sponsored by Bolloré, a French group belonging to Vicent Bolloré, a close friend of Nicolas Sarkozy, little known for his social commitments and rather a symbol of France’s infamous business association with some African dictators. But that aside, the meetup was greatly enriching.

And as usual I couldn’t help but look for fellow GVers (Global Voices colleagues) in the audience and there she was. Yawa Degboe is volunteer translator for Global Voices en français, editor of the newly born webzine Togozine.com and social activist. 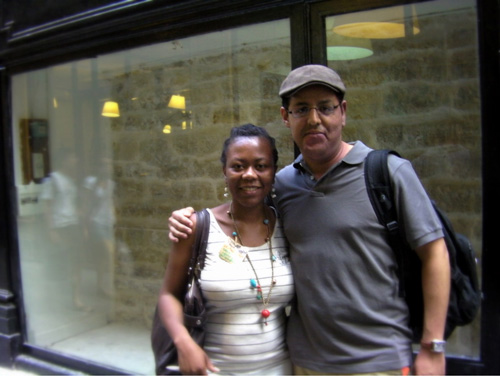 1 thought on “BarCamp Paris: Web 2.0 as a Means to Foster Social Innovation”