Reporters Without Borders is celebrating today, March 12, the World Day Against Cyber Censorship and is issuing an “Enemies of the Internet” list, naming and shaming countries where governments are restricting freedom of expression online.

Morocco has long been considered a relatively safe place for bloggers and journalists. It is no longer the case. While some major independent printed media has been shut down and journalists persecuted, forced to exile and often maliciously defamed, bloggers have been harassed, threatened and in some cases jailed for their writings.

Is Morocco an Enemy of the Internet? No straight answer to this question since Morocco is a country that cares about its image abroad, and if it wasn’t for the international mobilization and campaigns that regularly follow and highlight cases of violation of human rights and attacks on freedom of speech, I’m quite sure the Moroccan government wouldn’t bother going as far as blocking access to the Internet and censoring blogs and online news websites. But since a government cares for its reputation, there is always room for curving censorship by mounting targeted and well planned campaigns.

Threatened Voices is a website that monitors and maps cases where bloggers are being arrested, killed, or disappeared. It reports that more than half of threatened bloggers worldwide live in the Arab world. In Morocco alone, 5 bloggers are threatened, of which 2 at least are under arrest. Bloggers threatened in Tunisia and Egypt make up more that those reported in China and the whole of Europe, which goes to show that a region most commonly known as the Arab world, should most properly be called the black hole of freedom of expression online (and all other freedoms for that matter). 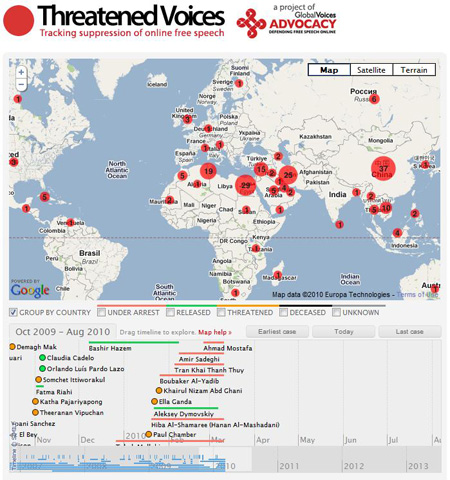 Yet, despite all this, people had the guts to speak up. Internet is considered a blessing in my country. Local communities are using it to improve their lives and assist the government in some areas when the latter could not or failed to deliver. In other cases people used the Internet to uncover gross abuses of power, to monitor elections, and to reveal widespread cases of corruption. Bloggers have been sharing their lives and thoughts while reporting on local news, sometimes making the news themselves, writing about, filming, or taking picture of places and people you won’t hear about in the mainstream media.

What does anti-censorship online mean? In my humble opinion it means protecting what in some countries has become the last frontier of freedom of expression, which is at the core of all other freedoms; the last place where people can still escape restrictions of oppressive regimes. It means using blogs, videos, pictures, social networks, podcasts and the innumerable tools available online to mobilize people around a cause, expose rights abuses, communicate local struggles and causes to the rest of the world, give voices to the disenfranchised and the minority groups, hold governments accountable, investigate and reveal the truth.